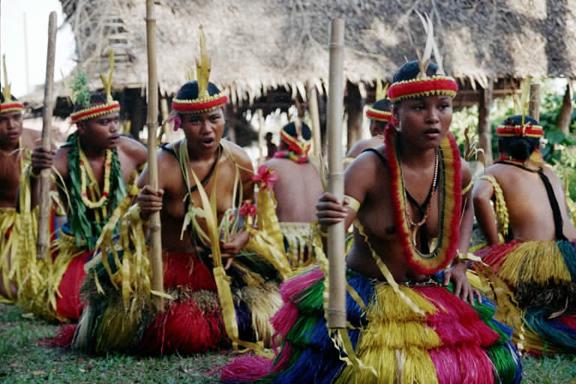 The Federated States of Micronesia was established in 1986 with four states – Yap, Chuuk, Pohnpei and Kosrae. It is a source of pride to Yapese that they are renowned within the region for their cultural conservatism, which is reflected within their constitution.

From August 1885 until 1986 these peoples were subject to colonisation by a succession of nations; the Spanish, Germans, Japanese and after WW2 the US. Even so, the Yapese have clung determinedly to their cultural values and determined that these values were entrenched within their constitution. At the time of the first Yap State Constitutional Convention in 1982 there were perhaps 6 motor vehicles in Yap. People still dressed and lived very much a traditional lifestyle. These tapes are remarkable and irreplaceable evidence of one peoples’ determination and attempts to integrate culture and democracy.

Recorded during the 1982 Constitutional Convention, this collection of 179 audiocassette tapes is unique. No other copies exist. They are a record of the values held and arguments put forward by Yapese as they struggled to shape a constitution that reflected their cultural values, civil liberties and democratic principles.

Established in 1998, Yap State Archives is staffed by an Australian (Cheryl Stanborough) and two trainees – one Yapese and one Satawalese. It contains a small, growing collection but has little in the way of resources or equipment.

Key issues are local climate, storage location and age of tapes. Although stored within and included as a permanent part of the collection of Yap State Archives, humidity, temperature and fluctuating power supply place this collection at risk. Within the past 12 months Yap has experienced three typhoons and a tropical storm. During the most severe, Super Typhoon Sudal (April 9, 2004), storm surge entered the Archive as well as removed sections of the roof, with much damage resulting.

Tapes are in a mix of five languages: Yapese, Woleaian, Ulithian, Satawalese and English. Often one person will speak in one language followed by a speaker of a different language group.

The audio sound will be migrated from cassette tapes to CDs. The local radio station is equipped to do this and can also remove to a certain extent any background noise. The data will then be transferred to a dedicated server, to be backed up daily, and translated and transcribed into English.

Visit the Yap Visitors Bureau for further information on Yap.

This project was successful in digitising all the audio tapes to 250 archival quality CDs, which are now stored in appropriate archival storage. The audio tapes have been translated into English and transcribed, with a small glossary of cultural terms added for information.

The translation and transcription of the Committee and Public hearings makes this material accessible to citizens of Yap State as well as international researchers. It is a treasure trove of cultural information, attitudes and beliefs.

Copies of the discs are stored at the Yap State Office of Archives and Records Management and at the British Library.