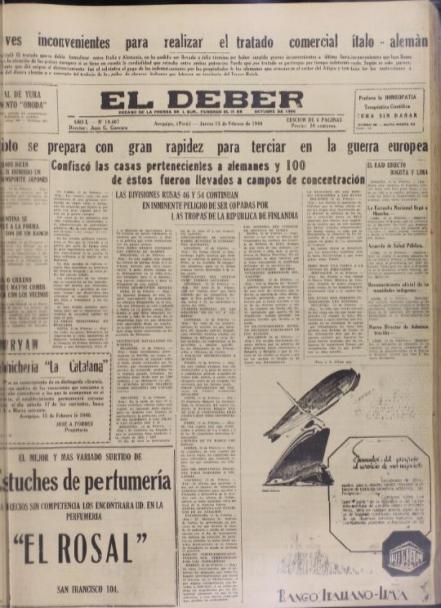 Catholic gazettes were edited and published in several Peruvian towns and their contributors expressed opinions on national or regional ethical affairs, political and social decisions, and polemical religious issues. Considered as an effective instrument in influencing public opinion, the Catholic press was an important voice in the political debate within a society that was in a continuous process of modernisation and secularisation throughout the 19th and 20th centuries.

“El Deber” was one of the most conservative newspapers in Peru throughout the 19th and 20th centuries and likely the most influential and long-lasting Catholic gazette ever issued in any province. This newspaper provides key information regarding the conservative political view for seven decades (1890-1962) and was an important voice in the national and regional debate. Edited in Arequipa, this daily supplied considerable information on local economic issues, political interests, ethical concerns and religious affairs.

Its contributors also provide local viewpoints on national and regional political decisions on a daily basis. Furthermore, Arequipa was the most important city in which “Catholic action” (social initiatives according to the Catholic Church’s doctrine) was intensively promoted among entrepreneurs, businessmen, employees and workers. An intense local political debate on such religious issues as mandatory civil marriage, legalization of divorce, secularization of education, religious intolerance, and the confiscation of ecclesiastical assets was discussed therein.

In addition, it provided portraits of daily life in the city and the surrounding towns. All issues included advertisements, the classified ad sections, extra and special supplements which can be studied from different perspectives. Historians can find valuable information on political, social, cultural, genealogical, intellectual and religious history. It is important to note that no other daily newspaper from Arequipa during this time period has ever been microfilmed, digitised or otherwise preserved.

This project aims to gather and digitally store the entire edition of this major conservative paper, which is in peril of extinction. As with most newspapers from this period, “El Deber’s” paper is highly acidic, brittle and fragile and much of the original print is beginning to fade. It can only be handled with upmost care.

No single library houses the entire collection, but it is available in two important archives: the Municipal Archive of Arequipa and the San Jeronimo Seminary. The Municipal repository allows public access to its material and this has resulted in deterioration from use. The San Jeronimo collection is better conserved since access to the material is allowed only through special permission. This restriction has resulted in a more complete collection in much better condition. No attempts have been made to preserve any of the collection in any film or digital.

The two collections have been made available to the project and with proper ordering and manipulation it will be possible to preserve the entire run of the newspaper, using both collections. Approximately 115,200 pages will be digitised and the digital collection will be deposited with the Seminary of San Jeronimo, the Municipal Library of Arequipa, the Universidad Católica San Pablo and the British Library.

All pages of “El Deber” were digitised in their entirety, from 1890 to 1962. The digital collection is composed of approximately 125,000 pages and stored on an 8TB-external disk and mailed to the British Library.

This project has been designed as the final phase of the process initiated by the two previous successful projects (EAP022, and EAP298), aiming to locate and preserve ethnographic audiovisual materials of expressive culture in Peru. Local intellectuals and collectors who live in diverse regions…

Digitisation, preservation and dissemination of parochial books and matrimonial records prior to the establishment of the Civil Registry in Peru

This project carries on from the earlier project EAP333. The main objective of this project is to digitise the 273 parish books and 47 marriage books dating from 1900 to 1940 of the parishes that make up the Diocese of Huacho: the provinces of Sings, Huaral, Huaura, Barranca, Oyon and Cajatambo,… 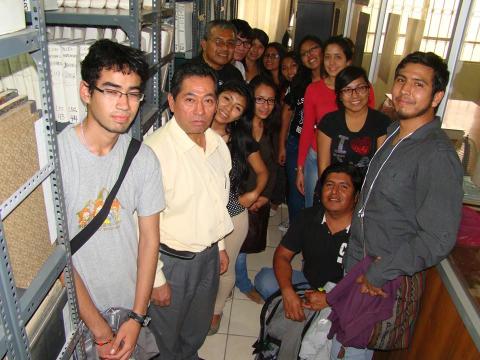 This project aims to ensure that the historical documents produced between the sixteenth and the twentieth century in landed estates around Peru and collected during the 1969-1973 agrarian reform are preserved and made available for general discussion and specialised study. They are held in parlous… 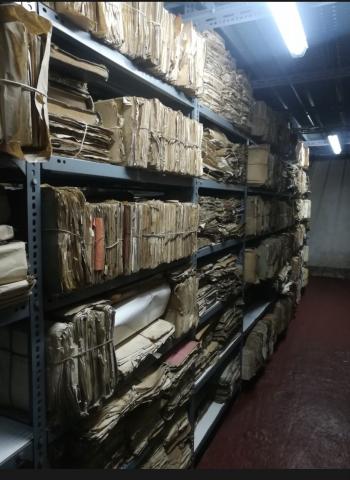